Google announced that it closed down Google+ Photos and will instead make improvements to its new Google Photos service. Shared content on the search giant’s social network will remain unaffected, but the creation, editing and backup functions will be transferred over to the new service.

According to head of Google Photos Anil Sabharwal, the move is due to the similarities between the G+ service and the new one. In other words, there’s no point in maintaining more or less the same product on different platforms, which of course makes perfect sense.

Users will be able to export their G+ photos to the new service and they will be able to continue to share photos and videos on the social platform, as before. However, the private images that are stored on G+ and the tools, will be replaced by Google Photos. This means that you’ll need to use the new service in order to access the following.

Anil Sabharwal said of the move,

“I sincerely appreciate for many of you [the move] is still a hard pill to swallow. And I promise we don't take decisions like this one lightly. The reality is that maintaining both Google+ Photos (the private photo management component of Google+) and Google Photos poses several challenges. Most notably, it is confusing to users why we have two offerings that virtually do the same thing, and it means our team needs to divide its focus rather than working on building a single, great user experience.”

The news has prompted yet another round of ‘G+ is dead’ articles all over the net, of course. Personally, I find the debate somewhat boring now, if only because (much like the SEO is dead ongoing debate) it never alters.

Every time a feature is changed or moved, or internal staff shuffles take place, a host of articles immediately hit the net declaring the social network dead and buried. Whilst this might be a strong indication that Google is quietly shutting down the platform, it hasn’t happened yet, despite all of the speculation. And if this conjecture had been true at any point in the last few years, then it would have happened already, surely?

Part of the reason for the ongoing speculation is due to a lack of data on how many active users there actually are on G+.

A study carried out by Eric Enge looked at users in more detail. One of the issues with deciding how useful G+ is has been due to the fact that when you sign up to any Google service you automatically create a G+ account. This has worked to create confusion and skew the numbers when it comes to the number of active users. 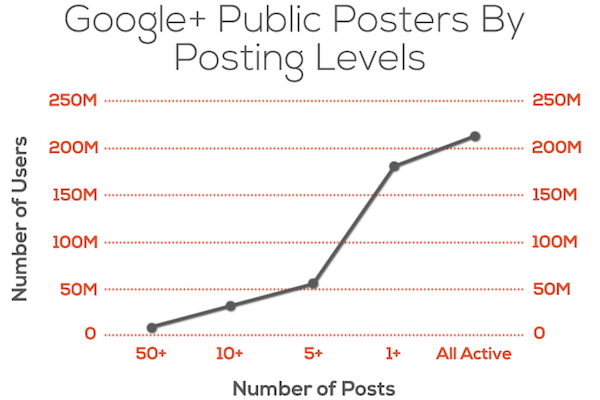 His study analysed 516,246 randomly chosen G+ profiles and unsurprisingly found that 90% of users had never posted on the site publicly at all. It was also found that around 23.4m users had posted publicly on the site in any given 30-day period. Once adjustments were applied to this figure, it was found that about 16m people post on the site each month.

Many of those that involve themselves in the G+ debate state that the site has a large amount of activity that’s kept private. Eric carried out a “fairly extensive analysis” in order to discover if this was true.

“The concept is to compare view counts of those profiles/ public activity with those that show no public activity. In theory, this will allow us to estimate just how much private activity there is going on. (For an explanation of what triggers view counts, click here.)”

Here’s a summary of the raw data:

According to Eric, the data suggests that,

“The incremental usage levels of people who do no public posting at all might be about 4.3 percent. It is important to note that this does not include “lurkers,” people who regularly view Google+ posts but never post themselves, publicly or privately.”

He goes on to say that whilst the figures might seem to confirm that the network is dead or dying, this isn’t the case. In fact, he says, when asking the question “are the days of the Google+ streamed numbered” his response was:

“Let me provide the simple one word answer to that question: NO. It’s not dead, and I don’t think they are going to kill it any time soon.”

In order to come to this conclusion, Eric says that it’s necessary to look more deeply into the issue at metrics which many bloggers discount when declaring the untimely death of the network.

“In addition to these [five] reasons, Google employees continue to make public statements about plans for Google+.”

G+ is Here to Stay

In an interview with Medium, head of Google Photos, Streams and Sharing Bradley Horowitz confirmed back in May that the social network is not dead, or dying.

“Three and a half years into this journey, we’re looking at what the users are telling us Google Plus is good for, and doubling down on those uses. For instance, one particular use-case on Google Plus is people aligning around common interests. If I’m interested in astronomy and I want to meet other people interested in astronomy, we think we have a good solution — Collections, a new feature that we launched just two weeks ago. It’s the first in a series of pivots. We’re also moving aside the things that either belong as independent products, like photos, or eliminating things that we think aren’t working.”

He went on to say that we’re “about to see a huge shift in what Plus is becoming” in response to what users are saying about the platform.

“We have made tremendous progress. We’ve done a better job of unifying infrastructure and understanding the concept of “person” at Google. And we have tremendous work ahead of us to really provide the right experiences for our users, so we’re in no way done and we’re in no way backing off of that mission.”

Any finally, when the inevitable question is posed …

“No, Google Plus is not dead. In fact, it’s got more signs of life than it’s had in some time.”

For all of the articles that have declared it dead over and over then, get over it now. It’s not, nor will it ever be, and in fact it was never even intended to be, a competitor to Facebook.

I’ve read some suggestions that G+ attracts more intelligent users, who are more highly educated than Facebook. I would question this, but I would also put forward that there’s a reason that there are discussions surrounding the intelligence levels of social media users on various platforms.

G+ tends to attract users who are more interested in posting educational content. People like webmasters, and designers and other web professionals who are more familiar with using the web effectively.

For example, there’s a lot less spam on G+ than you would find on Facebook. There are also many more users on the latter and it has more of a social focus than a business one. This means that often, people are not interested in educational content and as such, it gets less engagement (and of course, it has to reach people’s feeds in the first place.)

On Facebook, people want to engage with friends and family predominantly. They are open to engaging with brands and to seeing ads from the brands that they like.

On G+, there’s a much more professional feel. There are less personal posts. This is more than likely due to the fact that very few people seem to use G+ in a personal capacity when compared to Facebook. For brands, this could mean that it’s unlikely that they will effectively engage with followers on G+ when compared to Facebook. However, it doesn’t mean that nobody is engaging – I find it’s easier to gain engagement on the platform and that’s possibly down to its relatively small active user base.

G+ still has its uses and for the marketer, they are worth it. Google Places and MyBusiness can be used to more effectively direct users to a local business, G+ posts are picked up in search very quickly and as discussed, it’s usual to see more engagement on the platform than on other social networks.

So Once Again, G+ isn’t Dead

So please let’s stop the constant articles declaring it to be so and let’s stop going over old ground and rehashing old ideas. The platform is undoubtedly changing and it will be interesting to see how it evolves from here. It may be that it will begin to distance itself from the ‘social network’ label as changes take place, but all indications from Google itself show that the search giant has no intention of abandoning a product that it has ploughed millions into already.

If it was ever intended to be a rival to Facebook – which Google officials strenuously deny – then it has failed on that score, yes. But it hasn’t failed in general and it’s likely that we’ll see further changes take place in the near future.

In this episode, we dive into HubSpot Payments, HubSpot Roadmaps, using analytics views in traffic reports, and more!

In this episode, we dive into online event format over, saved sections in emails and pages, hubSpot deal splits and more!

In this episode, we dive into breaking down big goals, HubSpot Ads sequences, HubSpot Meetings overview, HubSpot workflow action to add contacts to an Ads Audience and more!