Making the Most of AdWords with a Small Budget

Making the Most of AdWords with a Small Budget

When it comes to advertising online, the first choice of many businesses is Google AdWords. However, many have such a small budget that they dismiss AdWords as being too expensive and/or not effective. This isn’t necessarily the case though, if you have a small budget then it’s still perfectly possible to see a ROI. Some PPC firms will tell you that in order to be effective, if you have a budget of less than $100 per day then you may as well not bother. I find that approach to be quite an arrogant one personally, very few small businesses with a couple of employees or those operating as a sole trader will have $3000 available each month to spend on advertising on just one channel.

Many smaller businesses advertise through multiple channels, with local advertising remaining highly popular. So if they are forced to choose between spending $3000 on just AdWords and advertising on other platforms, they will simply not bother with online advertising at all.

You should allocate budget to your AdWords campaigns then based on how much you can spend and this can be as little as $5 per day per campaign, although you should allocate as much as you can afford. Of course, there will be plenty of businesses and even competitors that can afford $100 per day plus, so in order to compete, you’ll have to get strategic.

Firstly, before you get started with AdWords, you should have a clearly defined goal in place. If you sell physical products, then this is usually quite simple, you will want to generate more sales with your ad. This can be for a specific product, which you may have just launched, for example. However, it’s not quite as straightforward when you’re selling services as you can’t track these in the same way in Google Analytics. That’s not to say that you can’t set goals, you can, but you will need to think about how and why.

Your goals should align with the needs of your target audience too, as well as what you hope to gain. For example, you may want to achieve a goal of selling X amount of a certain product, or you may want to track how many people land on a certain page and then take action. Whatever it is, ensure that you define your goal at the beginning and it will be easier and more effective to create great ads.

When it comes to targeting, you want to narrow your AdWords campaign so that it targets who you want to see the ad as closely as possible. These are those people that will make a purchase, or an enquiry, or perform an action that you want them to that are in your target niche. Targeting affords you the best chance to gain leads and even sales at the lowest cost possible.

One big area in which smaller businesses tend to fail when it comes to success with AdWords is in keyword research – namely not doing enough of it. Keywords are a pivotal ingredient when it comes to creating a campaign that works and this means that it’s necessary to carry out the following:

You should start with branded keywords which are low CPC (Cost per Click) as these tend to drive the highest conversion rates. It’s also wise to avoid what are known as generic head terms as these tend to relate to many, many businesses within your niche. For example, if you own a florist and just use the term 'florist' as a keyword, then there’s likely to be a lot of other businesses in your area trying to rank for it. With this in mind, you should try to find long tail keywords that include your city but also perhaps the postal code or area so that it’s quite a unique term and it’s highly relevant to your business.

So instead of florist in Sydney (of which I’m sure there’s 100s), you could choose 'Sydney florist Parramatta 2129'. Those searching would then click on the ad due to it being close to them and if you use ad extensions, can even call straight away when they’re out and about.

The amount of keywords you choose is also important. Many AdWords novices add as many as possible and then are stuck when it comes to monitoring performance as they just don’t have the time to go through all of them. Start small – you can always ad to the campaign at a later date and by starting out with a few highly targeted keywords, you’re not going to run out of budget halfway through the month.

Remember, your keywords are not something that you plonk on the account and then forget about, you need to monitor them closely and often. It’s unlikely that all of the broad match terms will be relevant so you need to pick up the ones that are not working for you and get rid, or pause. If you don’t then it’s likely that people that won’t convert will click on your ad and up your CTR, which will mean that you’ll be paying out cash for a higher bounce rate.

For those that are generating a CTR of less than 0.50, you should get rid of them. Keep an eye on the quality of all your keywords in order to ensure that you’re not leaking budget in an area that you don’t need to.

It’s thought that a lot of the time, AdWords campaigns are not effective for small businesses as they just don’t put enough time into researching and monitoring keywords and ads to completely maximise budget. Some businesses only login to their AdWords accounts once a quarter and then wonder why it’s not performing at all – like anything else in business, it requires planning and ongoing strategizing if it’s to work effectively.

If you’re not sure that you’ll have the time to devote to the campaign weekly, then do away with broad match altogether in order to ensure that your budget doesn’t get out of control.

Negative keywords are hugely important if you have a limited budget as they stop your ad being shown when the keyword is used in search. For example, I once worked with a campaign which included the word ‘sponge’ in its brand name. A negative keyword added to the campaign was ‘spongebob’ which, as you can imagine, meant that the branded keyword got a lot of irrelevant traffic before the negative term was added.

Negative keywords tell Google not to show your ad if someone who is searching enters that word into Google search. Without them it’s likely that you’ll see a high CTR and CPC and your return on investment will be negligible, especially with a small budget.

So, if your business is a florist and you sell oasis (the spongey stuff that you make floral arrangements with) then you may want to add this as a negative keyword so that people looking for the band don’t see the ad, for example.

For smaller budgets, it’s desirable to choose just one ad network rather than both of them and the best is Google Search. Whilst it would be nice to be able to use all of them, the reality is that you don’t have the funds and the Display Network options will not give you leads that are as qualified as the those you gain through the Search Network.

If you use both, then you’re essentially spreading your budget too thinly and this will return mediocre results. The Search Network shows your ad when people are actively searching for it using specific keywords, whilst the Display Network shows ads contextually on websites that use Google AdSense. The Search Network is easier to handle and manage too and will give a better result for a campaign with a low budget.

You should also avoid dynamic search ads as these tend to result in irrelevant clicks that will push your budget up.

The Quality Score is determined by the quality and relevance of both keywords and ads and is used to calculate CPC and how to place your ad in relation to others. It depends on multiple factors, such as:

Improving your Quality Score leads to lower costs and as such an improved ROI. 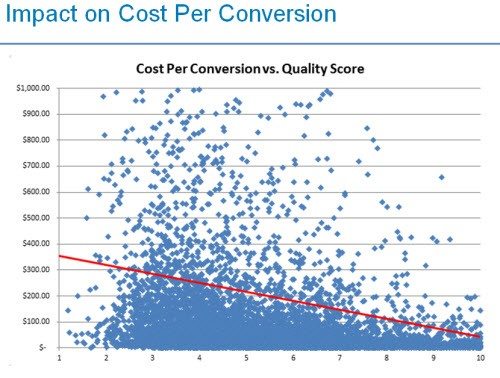 The higher the Quality Score, the less you pay per conversion as it essentially means that Google approves of the ad and how relevant it is to your prospects. You can improve your score by looking at the following areas:

When it comes to keywords, we’ve discussed why it’s a better idea not to use too many in the first instance, but you should also organise them and ensure that they only appear once on each campaign and that all of the keywords for each campaign are highly relevant. When it comes to Quality Scores, relevance is hugely important so do ensure that all of your keywords used both in your campaign and on your landing page are very much relevant to your industry.

As Quality Score is really all about the keywords used you should start as you mean to go on when you first start performing research. Ensure that your account is well organised, that you separate out campaigns for each goal and that you group keywords well in relevant groups. If you practice good habits from the outset, then your Quality Scores should automatically improve as time goes on.

When it comes to your AdWords campaign, it pays to have good habits if it’s going to be effective in the long term. If you’re taking over an existing campaign, then it’s even worth suspending one that’s not performing at all in order to first clean it up and get it to a state where it can provide ROI. This means doing away with underperforming keywords, adding negative keywords and ensuring that you’re targeting the correct audience. It’s quite difficult to come into a campaign and get it running nicely when it’s been poorly set up, and it’s likely to add to the costs overall if you attempt to clean it, so often, it’s even worth starting from scratch.

There’s been a fair amount of AdWords criticism online from some big names such as Forbes which say that it’s not worth the bother when it comes to small business. That’s not the case though, so long as the campaign is properly researched and managed. If you don’t have the time to do this yourself, then it’s really a case of either don’t bother or hire someone to do it for you as it does need the time to be put in if it’s going to perform in such a way that’s valuable to business. The problem with AdWords as opposed to more traditional, print advertising, is that you’re expected to do it yourself and that’s sometimes quite a tall order for the average small business owner.

When it comes to budget, give AdWords as much as you can afford, tweak campaigns and monitor often and you should see your cash beginning to work for you.