A new industry report from Simply Measured takes a look at the changes that we’ve seen take place on Facebook this year and how this has impacted on the brands that use the site. The end of last year and the first half of 2015 has seen changes such as the ways that Page Likes are counted impact on brand’s reach. Add to this that the site has also modified how it serves certain types of content and it’s easy to see why some bloggers are suggesting that brands should just get rid of their Facebook Page.

Despite this, the report found that in the first few months of the year, Facebook enjoyed:

So the site is not suffering from any signs of brands and marketers leaving it for pastures new. There’s no denying that it’s now increasingly difficult to gain organic reach on Facebook though and nor is a secret. Facebook announced at the end of 2014 that it was to make algorithm changes that would impact reach.

The study looks at the top 100 global brands and how they have been using the site in 2015.

When comparing the rate of engagement seen by brands in the final quarter of 2014 to the first quarter of 2015, the study found that Facebook fan and Post counts both decreased. However, it was also found that during this period, fan engagement remained about the same. Whilst the site’s drive to discover and delete fake fan accounts did take place and have some impact, it had a minor effect on brand’s fan counts.

Brand posts during this time dropped slightly, but overall, year-on-year, the study found that the brands studied had “seen a dramatic increase in engagement” with a 43.5% rise. Likes were found to be still by far the most popular engagement but shares increased “largely due to photos and videos.”

With this in mind, brands should map out a strategy for posting different kinds of content to attract more shares and thus more organic reach. According to Facebook itself, advertising on the site in 2015 has increased by 31% and it’s thought that brands are now focusing more on quality than quantity, as reflected in the fact that they posted less yet enjoyed no dip in engagement.

For those brands that it studied – which are known as Interbrand 100 brands – it was found that in Q1 2015, they received 28% more shares than in the previous quarter. 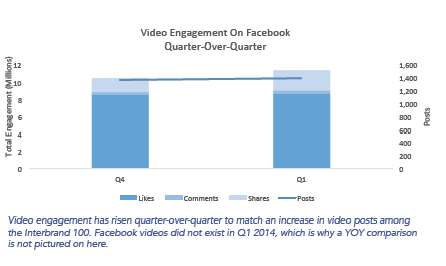 The study also found that when it comes to the type of content, fans behave in different ways. Links and photos were found to be the kind of content that drive the most engagement, but,

This is no surprise. Recently Facebook surpassed desktop videos views on YouTube and it’s likely that they will do on mobile soon too. Native videos within the feed have proved to be incredibly popular and were a smart move for the social media site. Brands that really want to take advantage of the platform should add video to their content strategy plan in order to boost engagement and reach.

As pointed out in the study, the top brands are concentrating less on posting more often and more on the type of content that they post. As links and Likes attract the most, but video offers the most opportunity for going viral, brands and marketers need to create a solid strategy that includes all types of content and encourages engagement.

As social media has matured it has been increasingly necessary to approach it from a strategic position. This is vital if you’re to prove social media ROI and effectively measure its impact. Social media is still a young discipline, but its worth has been proven now and it’s more than possible to gain significant ROI. However, without a strategy, it’s very difficult.

With this in mind, marketing managers should consider the following:

When it comes to Facebook, in my opinion it’s worth keeping. It is the most used social media site in the world and for this reason, binning your business page just seems a little like cutting off your nose to spite your face to me. It’s not easy to obtain engagement if your brand is very small, but it is possible. The advertising is very flexible too and you can get great results just from boosting posts now and then when your budget allows it.

Overall, you should come up with a strategy that mixes up your content in order to achieve different types of engagement. You can get yourself a content calendar to help you with this, and you should also use a scheduling tool that can help you to reach fans in different areas.

You should also of course respond to engagement as quickly as possible. For personal brands, do get involved with personally responding to your followers where you can. This should ideally be done by brands too, using an appropriate CRM.

According to the Simply Measured study, Facebook is worth it but its effectiveness and the engagement that you receive is dependent on the industry that you’re in and the kind of content that you post. For more information on how industries vary, you should check out the full report.